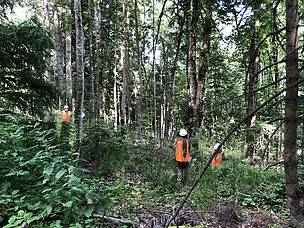 FSC audit at JSC, Russian Caucasus
© WWF Russia
The procedure was implemented in the framework of the WWF-IKEA Partnership and initiated by IKEA with support of WWF-Russia. The Russian Caucasus is the only territory in Russia with beech tree forest.

FSC certification entails that as a minimum, commercial logging operations need to comply with all applicable laws of the country and international treaties and agreements to which the country is a signatory. It also has to comply with all FSC Principles and Criteria, including conserving biological diversity and its associated values, water resources, soils, and unique and fragile ecosystems and landscapes, and, by so doing, maintain the ecological functions and the integrity of the forest.

WWF supports voluntary forest certification under the FSC scheme both globally and in Russia as it helps prevent forest degradation and depletion of our planet's forest resources. More than 47 million hectares of forests have already been FSC certified in Russia, with a first now also in the Russian Caucasus.

"FSC certification of JSC Forest is an important stage for development of the Adygea forest industry. It’s an opportunity to work in new markets and it also increases environmental and social responsibility of enterprises. At the moment we are considering the possibility of preparing other forest companies in the Republic of Adygea for FSC certification," said Rashid Belmekhov, Head of Forestry Administration, Republic of Adygea.

Driving concessions towards responsible forest management through FSC-certification in the Russian Caucasus started in 2015 as part of the WWF and IKEA partnership on forests when forest companies from the Kirov Region already certified got the opportunity to share their experiences with concession holders in the Republic of Adygea and Krasnodar regions. As a next step,  biodiversity conservation during logging operations and the identification of High Conservation Value Forests (HCV) became hot topics on the agenda of several meetings with local forestry companies, regional forestry authorities, environmental NGOs and FSC certification experts from other regions in Russia.  This resulted in the largest forest lease holder of the Republic of Adygea, JSC Forest, entering the FSC-certification process in August 2016, supported by WWF technical forest experts.

"FSC certification is an important tool for biodiversity conservation in the Russian Caucasus. We would like to see this positive experience applied by other responsible forest companies in the Republic of Adygea in future," said Elena Cherkasova, forest project coordinator at WWF-Russia’s Northern Caucasus Regional Office.

“The Russian Caucasus is a unique forest region that has some complex problems. Hundreds of rare species of flora and fauna can be found here; almost all forest ecosystems of the Russian Caucasus have great ecological value. On the other hand, many tree species are economically valuable. For example, the only areas in Russia where beech grows are the Russian Caucasus and a small area in the Kaliningrad Region. At the same time, the Russian Caucasus is in focus for many environmental organizations due to illegal logging here. It’s very difficult to find a balance between social, ecological and economic functions of forests in the Russian Caucasus. We believe that FSC certification will help to find such a compromise and will contribute to responsible forest management in the region,” explained Nikolay Shmatkov, the Director of FSC-Russia.”

“We are pleased with the successful FSC certification in the Republic of Adygea within the framework of the WWF and IKEA partnership on forests. This is the first step for the implementation of sustainable forest management in southern Russia where lots of valuable tree species grow. The world's forests are limited, and we believe that through sustainable forest management the number of illegal logging cases will be reduced, local economy will be supported and new jobs will be created".

Responsible forest management is critical for the protection of the world's ecosystems, biodiversity conservation and mitigation of climate change impacts. Our consumers and our employees are concerned about forest management all over the world.  IKEA is one of the major wood consumers, we feel responsible for it, and we have an opportunity to have a positive impact on forest management. 35 million hectares of forests have already been FSC certified within the framework of WWF and IKEA partnership on forests,” said Konstantin Agapov, Forestry Manager at IKEA Purchasing Services Russia LLC.