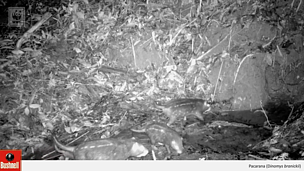 The sighting is the result of an unprecedented monitoring programme carried out in late 2017 by WWF-Brazil and partners in Acre, pairing technology with local community knowledge to monitor the fauna biodiversity in the Chico Mendes Extractive Reserve.

The Reserve was created in 1990 and encompasses over 950,000 hectares. The area is spread over nine municipal districts in Acre and there are 10,000 people living within this Protected Area. Local communities are allowed to harvest timber as well as non-timber forest products such as Brazilian nuts.

“The sighting of pacaranas shows that as long as we fulfill some norms, it’s possible to use forest resources while ensuring that animals continue to be there”, says Felipe Spina Avino, biologist and conservation analyst at WWF-Brazil.

Pacarana is a rare species and there is scarce scientific information available about it. The most famous relative of pacarana is the pre-historical animal Josephoartigasia Monesi – weighing over one ton and considered to be the largest rodent ever recorded.

Although rare in Brazil, pacaranas are found more frequently in countries such as Bolivia, Peru, and Colombia. But there are very few records of them in the wild, especially in Brazil. Hunting and forest habitat destruction are the major threats.

In late 2017, a set of camera traps were set up within the Chico Mendes Extractive Reserve to monitor the fauna as well as to help improve the methods of timber extraction. In order to continue harvesting and commercializing the timber, community members are required to prove that this economic activity does not negatively impact biodiversity. The camera traps help to monitor the animals and examine these impacts.

Since December, eight camera traps have been installed in the Reserve. Just in the first round of monitoring, more than 116 records were made, and over 20 different species were captured by the cameras.

In order to expand the monitoring, another 12 cameras will be set up this year.

Forest engineer Jardel Freitas said that the community members are enthusiastic about the fauna monitoring: “We see this initiative in a positive way, as it will improve the quality of our work. If we can be aware of the logging impact upon the fauna, we will be able to structure better projects. We want to show that, with the right practices, it’s possible to use the forest resources and minimize the impacts upon the animals in the explored areas”.

Partners in the project include the Community Forest Producers Cooperative (COOPERFLORESTA), a community organization working with the sustainable exploration of timber in the Chico Mendes Extractive Reserve, The Chico Mendes Resex Dwellers and Producers Association in Xapuri (AMOPREX) and the Chico Mendes Institute for Biodiversity Conservation (ICMBio, the federal agency for biodiversity conservation). 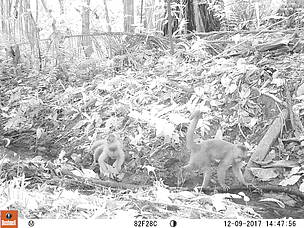