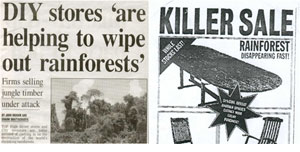 In the late 1980s, protests erupted around the world over the declining state of forests. People, more than ever, were outraged at the mass clearing of timber, about furniture made from tropical wood and at reports of illegal logging.

On 18 September 1989, Time Magazine featured on its cover the burning of the Amazon, and the headline seemed to articulate the growing fear and skepticism on everyone’s mind: “Can the rain forest be saved?”

The news, clearly, was not good for the future of forests. For the forest products industry, it would mean an inevitably diminishing supply of materials. It also meant terrible press. Contributing to the decline of global forests did not make for good public relations. In response, product claims of sustainability flooded the market. Most could not be validated, leaving consumers confused and mistrusting, and companies unsure of how to respond.

Working within the market to find a solution

In 1991, a small number of forest products companies located in the UK bought into an idea. Amid the uproar, it may have seemed relatively quiet at the time, but it was an idea that would prove revolutionary: to work within the market to address the deforestation crisis. The plan presented by WWF was not to halt logging in tropical forests—an expected response—but rather to provide economic incentives to keep tropical forests standing.

A group began to form and ask questions. They sought answers regarding the origins of their supply as well as forest management practices and anti-logging legislation. These 20 companies came together and made the groundbreaking public commitment to buy their wood and wood products only from “well managed” forests.

This group called themselves the WWF 1995 Group, with the ambitious goal to phase out all wood and wood products not originating from “well managed forests” by the year 1995. It soon became clear that much more time would be needed to reach this target and that 1995 was overly optimistic; however, the intention and foundation that was set changed the face of forest management and trade. And a new NGO–Industry partnership was born.

Not only did the work of WWF 1995 Group play a leading role in the establishment of the Forest Stewardship Council (FSC), an independent means of credible certification whose claims the public could trust, it also lay the groundwork for the Network we know today. What began as the WWF 1995 Group in the UK is now the GFTN and spans across the globe, connecting forest products companies in value-building relationships as they work together toward one common goal: to safeguard the world’s forests—and the communities, economies and ecosystems that depend upon them.

Clippings from the past
© WWF Enlarge
© WWF/GFTN & Jungle Run Productions 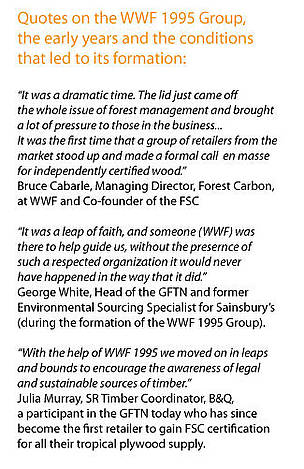 Quotes on the WWF 1995 Group
© WWF/GFTN Enlarge
Like this article?