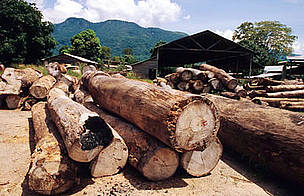 The TRAFFIC report documents alarming levels of illegal logging and exports of forest products from Tanzania. Sawmill, Udzungwa Mountains, Tanzania.
© WWF / John E. Newby
Dar es Salaam, Tanzania – Millions of dollars worth of timber revenue is being lost each year in Tanzania because of poor governance and rampant corruption in the forestry sector, according to a new report by TRAFFIC International, launched today.

The report — Forestry, governance and national development: Lessons learned from a logging boom in southern Tanzania — documents alarming levels of corruption, illegal logging and exports of forest products from Tanzania.

Annually, timber royalty losses amounted to US$58 million during 2004 and 2005. Trade losses are also significant: China imported ten times more timber from Tanzania than is documented by Tanzania’s export records, implying a 90% loss of revenue from this source. Up to 96% of potential timber royalties were lost by central and district governments due to under-collection — entire District Council budgets could have been increased several times over.

“We’re now in the situation where the Tanzanian forestry sector is highly dependent upon donor funding despite having the clear potential to be self-sufficient from timber revenues.”

Uncontrolled timber harvesting in southern Tanzania grew rapidly from 2003, largely because of increasing overseas demand, especially from China. Driven by greed and profit, some operators broke laws, paid minimal wages and minimal prices for harvested logs — just 1% of their export value. Meanwhile, Tanzanian hardwoods commanded high prices internationally, compared to timber from West and Central Africa. The unsustainable harvesting has led to environmental degradation and the loss of commercially viable hardwoods in many areas.

“Although community-based forest management is widespread in Tanzania, rural communities unfortunately just aren’t demanding enough accountability. Who’s cutting their forests down, and where are the profits going?” asks TRAFFIC’s Simon Milledge, an author of the report.

More than half of the 28 logging companies studied had close links to senior forest or government officials. In some rural areas, the involvement of village leaders in the timber trade has led to an unfair distribution of profits, and at higher levels, there are many examples of self-dealing, nepotism and cronyism.

“The Tanzanian government has tried to regulate the timber trade, through harvest and export bans, the establishment of forest surveillance units, and a review of licensing and harvesting procedures, but serious governance shortfalls have undermined these commendable measures,” says Milledge.

“While the situation has improved somewhat since 2006, the government still needs to do much more to tighten up its regulation of the industry and stamp out the corruption within it.”

“It’s not a question of stopping the logging and exportation of forest products, but of proper regulation of the timber industry and taking advantage of existing bilateral trade opportunities with countries such as China. Proper enforcement in the forestry sector will bring benefits for the whole nation.”

The report details how forestry-related corruption and other factors affecting good governance are preventing Tanzania reaching the goals set out in the country's National Strategy for Growth and Reduction of Poverty (2005).

Forestry, governance and national development: Lessons learned from a logging boom in southern Tanzania was funded by the Norwegian embassy in Tanzania and written jointly by TRAFFIC, the government of Tanzania, and the Tanzanian Development Partners Group.